Sometimes...God Is At The Laundry Mat 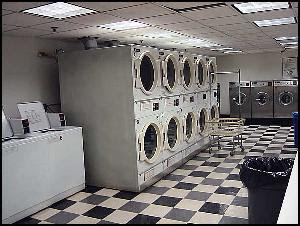 So often people ask, "Where is God when I am hurting?" or "Why doesn't God help me?"

There are times even in the believer's life that God seems very silent. Imagine...400 years of silence between the Old and New testaments of the bible. I can hardly stand not seeing Him at work in my life for a day much less years, but He often allows periods of what seems to be silence in my life. Yours?

Some of you have read bits and pieces of our family's rough patches in our walk the past few years. Maybe you knew we had just moved to a new town for a job promotion for my husband, Richard in Dec. 2000. Maybe you also remember, we had not yet sold our home in the town we were leaving so we had twice the living expenses for 10 months. No big deal right? I mean, after all we were yuppies! We made enough to cover both places for awhile. We had made all the right decisions financially for 15 years and saved and invested and ....blah, blah, blah! Who knew a decision by suicide pilots to fly through the Trade Centers would leave fall out that landed in our living room in Oklahoma so far away.
Rich was an aircraft manufacturing manager and within one week of 9/11, he lost his job. So...2 house payments, 4 kids, 3 cars payments and 0 jobs did not add up to financial freedom.

One afternoon, before the kids were out of school, I loaded up the weekly clothes and headed to the local laundry mat. I had now done this for 6 months since our home had not sold and we had not officially moved everything including the washer and dryer to our new home. The housing market was not great after the layoffs and our funds were running out waiting for our homes to sell by this time. After years of saving for kids college and our retirement, we were now living off of that savings. Before this time in our marriage, I would at least have enough cash on hand for necessities and a few non-essentials too.
But now, here I was at the laundry mat with my broken pride and bag-0-quarters and just enough time to get things dry before picking up the kids from school. I mentioned I had been going to this place off and on for almost 6 months. Well, being the good little Christian that I was, I scoped out the gal behind the counter months earlier and thought to myself,"I should get to know her and tell her about Jesus". I just never got around to it! Now, here I was, putting my last quarter from the baggie into the dryer to try and get the jeans dry. So why would she want to know anything about what I had to say? I mean, we were broken. Richard's mother had died only a few months earlier, we were in a new town and the kids missed their friends, I had been a stay at home mom for 15 years and Rich could not even get a job flipping burgers because they would say, "you are over qualified" which meant they would not spend money to train someone they thought would leave when the economy picked up, and believe it or not, I somehow had stopped being invited to even go with ladies from our bible study to eat lunch because it must have been uncomfortable asking,"has Richard found a job yet" after months of the same question. There was a lot of loss in our nation and in our home and at this point my cheerful outlook had dropped like that quarter into the machine. I felt like God had forgotten our family. Where was God? Why did He let this happen to our family? Why was He so silent? Again, Where IS GOD?
As the clock ticked and it came within a few minutes of time to get my children, the dryer beeped the sound that signifies you have a minute left to add another quarter for more time. I reached in to get the jeans out and they were still wet! Now, I know, in the scheme of life this seems rather insignificant. However, if you have ever been to that place where that last proverbial straw shows up...it was likely rather insignificant to the world but HUGE to you. I just needed a quarter...is that too much to ask? I would have made a mad dash to the car to try and dig up loose change but we had passed that milestone about a week earlier when class picture money was needed! About 30 seconds into the final beep...Brenda, the gal I thought I would someday share Jesus with, walked over to me and said,"Kathy, you don't seem like yourself today. May I pray for you?" and she wrapped me in her arms and prayed in Jesus name that I would know how much HE loved ME! At the end of her sweet moment of prayer, I heard a clank against the dryer door window...and a quarter had fallen from the pocket of one of the kids jeans. With tears in my eyes and a lump (I suspect from humble pie going down) in my throat, I opened the door to retrieve the quarter to finish drying my children's clothes.
All I could say through the tears to Miss Brenda, was...sometimes, God is at the laundry mat!

It's been almost 10 years since that happened, and some of you know we still trust God from day to day financially. Recovery is slow, but God is good. He has taught our family to trust in Him no matter what our circumstance may be saying or even shouting.
How many months I missed out on a true time of fellowship with a sister in Christ because I poorly assessed another person. God does not play favorites...but we do. Just because I lived in a $250,000 home (which we could now not afford) and Brenda worked very hard for her minimum wage job, did not make either of us more significant in our Lord's eyes. Her prayer comforted me, and His provision answered my question...Where is God? He was there all along, I had lost my focus.

I wonder if there is a Brenda in your life today. Maybe someone you scoped out as in need of your wealth of information...when really...you could learn from them?

Acts 10:34
Then Peter opened his mouth, and said, Of a truth I perceive that God is no respecter of persons