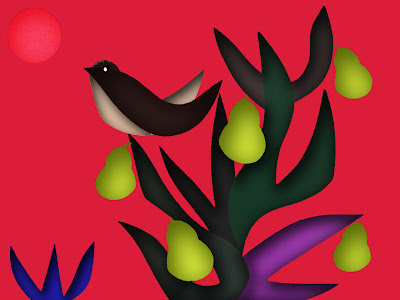 A Partridge? A Pear Tree? Not Danny Bonaduce In a Bradford? Not David Cassidy?

The Twelve Days of Christmas
The Meaning Behind The Song

The twelve days of Christmas are the twelve days between Christmas Day, Dec. 25th, the birth of Jesus, and the Epiphany, Jan. 6th, the day Christians celebrate the arrival of the Magi (Wise Men) and the revelation of Christ as the light of the world.

The Christmas song, "The Twelve Days of Christmas" may sound silly and contrived to many of us. But it actually had its origins in religious symbolism - and with a serious purpose.

It dates from a time of religious persecution. The song, "The Twelve Days of Christmas," was written as a kind of secret catechism that could sing in public without fear of arrest - a learning or memory aid to Christians in fact.

The song can be taken at two levels of interpretation - the surface meaning, or the hidden meaning known only to the Christians involved.

Each element is a code word for a religious truth.


1. The partridge in a pear tree is Jesus.
2. The two turtledoves are the Old and New Testaments.
3. Three French hens stand for faith, hope and love.
4. The four calling birds are the four Gospels.
5. The five gold rings recall the Hebrew Torah (Law), or the Pentateuch, the first five books of the Old Testament.
6. The six geese a-laying stand for the six days of creation.
7. The seven swans a-swimming represent the seven gifts of the Holy Spirit.
8. The eight maids a-milking are the eight Beatitudes.
9. Nine ladies dancing are the nine fruits of the Holy Spirit.
10. The ten lords a-leaping are the Ten Commandments.
11. Eleven pipers piping represent the eleven faithful Apostles.
12. Twelve drummers drumming symbolize the twelve points of doctrine in the Apostles Creed. 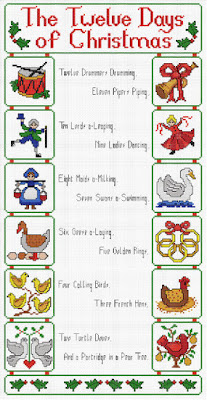 If you think Jesus being symbolized as a partridge in a pear tree sounds blasphemous, remember:
"Jerusalem! Jerusalem! How often would I have sheltered thee under my wings, as a hen does her chicks, but thou wouldst not have it so." (Luke 13:34 and Matthew 23:34)
The "true love" in the song refers to God Himself.
The "me" receiving the gifts is every Christian.
So that "silly" song we sing at Christmas time has more meaning than some of us thought.

Merry Christmas and go put on some music!