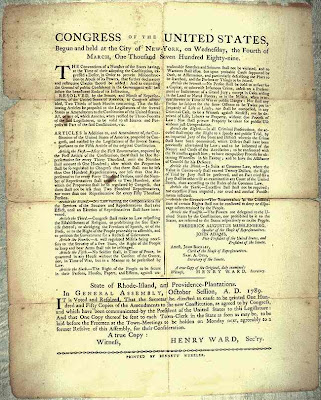 A friend recently commented that her two daughters (Freshman and a Senior) asked about some constitutional issues. The first daughter asked what was in the 2nd Amendment...the parents both said they were not exactly sure. The other daughter then said, "As Christians, shouldn't we know the 10 Amendments?" I told them the 2nd Amendment gave me the right to wear a sundress. It did, I have the right to BARE ARMS!

She has a point....well except the whole number issue!

Here's a peak...you look up the longer version if you, like me, have not read them since someone threatened you with a test over them in school!

YOU HAVE THE FREEDOM TO STILL LOOK THESE UP YOU KNOW!

The US Constitution, recognized as the supreme and basic law upon which the framework of the US government is set, has been amended 27 times over the past 200 years. The first 10 amendments are collectively known as the 'Bill of Rights' and the other 17 are the subsequent amendments. Here's a detailed list of the 27 amendments to the US Constitution