How to Eat A June Bug

Did you even own a calendar?
Was there a reason you rebelled against the name you had been given by showing up at a Southeast Texas Track Meet with thousands of your grubby friends and family in early April?
I always thought that you were either blind or at best a bit slow witted, but seriously, a calendar... a calendar. 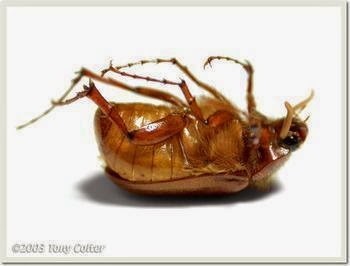 No one invited you.
No one expected you.

Jason had been doing Algebra homework in between his events. As the last event to run was announced, he closed his book and... squished something crunchy .

We were simply minding our own business, waiting for the long day to advance.
But you, you and your drunken, evil, careless cohorts...you appeared! Jase could solve for X but had no way to figure you out!

Day turned to night and a long track meet drummed on into the evening.

As the stadium lights came on, the almost deafening buzz/hum...no...no, more of a military air attack sound began.  The crowd roared, but this time...not for their star athlete rounding the turn. This time...screams, squatting, unnatural movements of flailing hands about the head and shoulders of many innocent bystanders took the spotlight -or should I say took the  football stadium high voltage bug magnet lights.
Utter chaos in the Lone Star State ensued!

At first there were simple giggles - uncomfortable questions.

"Isn't this early for June Bugs?"

There was grumbling through the crowd.

One man commenting on the few of you near his feet looking as though you'd  come from a June Bug frat party with your little drunken weaving... staggering...crawling.

Then there was the dive bombing.

The blind kamikaze like attacks from mid-air! Oh the horror!

Suddenly, as if to speak for the whole stadium, a little three year old- happy as a lark - minding his own business -  walking next to his dad...looked down...and screamed!

Not just a scream. A blood curdling scream stating what everyone in earshot wished they had the courage to say:

"DADDY! BUGS...EVERYWHERE...BUUUUGS! THEY HATE ME!  I HATE BUGS! NOOOOOOOOO!
MAKE THEM GO HOME!"

There I was, watching my son run his final race for the event. As he turned the corner for the home stretch he seemed to kick it in to a higher gear. So I naturally began to cheer.

This type of  cheering results in the opening of one's mouth.

Now, please Sir/Madame Bug (as who takes time to check these things?) what on earth caused you at that very moment to make your suicidal dive into the bleachers...and...into...my mouth?

I grew up in Oklahoma. There are June bugs.
I am not a sissy.
I deal with it.  We've known many of your cousins. They, although not always living  up to their name either, would hold off at the very least until late May.

I am not sorry for what may have happened to you.
You deserved what you got.
I do not think the same could be said for most of us in the stands!

On the up-side...I think I accidentally medaled in the girls 300 meter hurdles as I jumped over at least 4 rows of seats running away from you...so...

I am now going to write to the Agricultural Department of Texas A & M to make sure they remove the very incorrect description of your life cycle stating:

Pest Status: Larval stages eat roots of grasses, vegetable and ornamental plants; Adults can be a nuisance around lights at night in early summer; medically harmless.

I beg to differ on the "medically harmless" portion as a June Bug in my mouth resulted in clawing, queasiness, heart rate elevations, and an over all feeling of ill will...ya might even say murderous feelings toward your fellow bugs!

Jason finished his race and placed, even while trying to dodge the likes of you and your posse. And I think I managed to ditch you, which took guts (perhaps your's and definitely mine) to do it!

Please, if you are in bug hell, pass this foot note to your homey (who tried a ninja attack in the car on the way home on a dark Texas back road).

If you did survive trackmeggedin then - get a calendar  or change your name.

Note to Homey June Bug:
As you attached your ugly 3 sets of legs to my neck while I was driving, and I instinctively grabbed you and pulled you off and threw you to the floor, swerving right next to a Texas Sheriff's car (a story for another day) Jason's track spike was your final landing place. I feel he was quite merciful to you by opening the window and bashing you against the car...as he quietly murmured, "Well, the good news is ...bug's gone...the bad news is...the paint on the car may be as well...cuz, you know...track spikes! Sorry." I just wanted to tell you thanks for the fun ride home.--

In closing may I just say again... you really could have made both our lives simpler by owning...a calendar.

If you would like to warn any larvae in order to stop future Grub fatalities...this is the formula for  HOW TO EAT A JUNE BUG. They should pay attention.

P.S.  Why is this on a Christian Blog? You ask?   Well,  June bugs are one of the most solid arguments against Natural Selection.  Nothing this stupid survives without a creator!!!