So HE Could Exist 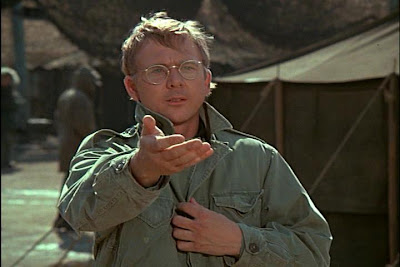 When I first saw this years ago I cried...If you ever saw the episode "Blood Brothers" on MASH with Patrick Swayze...you'll remember why.

I want to tell you about two men. Each facing his own crisis. The first man you know rather well. The second is a patient here. Well, the first man thought he was facing a crisis. But what he was really doing was trying to impress someone. He was looking for recognition, encouragement, a pat on the back. And whenever that recognition seemed threatened he reacted rather childishly. Blamed everyone for his problems but himself because he was thinking only of himself. But the second man was confronted with the greatest crisis mortal man can face, the loss of his life. I think you will agree that the second man had every right to be selfish. But instead he chose to think not of himself, but of a brother. A brother! When the first man saw the dignity and the selflessness of the second man, he realized how petty and selfish he had...I....I...I had been. It made me see something more clearly than I've ever seen it before. God didn't put us here for that pat on the back. He created us so he could be here himself. So he could exist in the lives of those he created, in his image.

19-21What actually took place is this: I tried keeping rules and working my head off to please God, and it didn't work. So I quit being a "law man" so that I could be God's man. Christ's life showed me how, and enabled me to do it. I identified myself completely with him. Indeed, I have been crucified with Christ. My ego is no longer central. It is no longer important that I appear righteous before you or have your good opinion, and I am no longer driven to impress God. Christ lives in me. The life you see me living is not "mine," but it is lived by faith in the Son of God, who loved me and gave himself for me. I am not going to go back on that.