Life on the Sidewalk 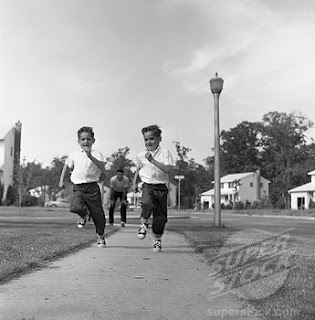 I've notice that there is a rush to walk dogs in our new neighborhood in between thunderstorms.
It seems it is also a time that parents encourage some of the children to go out and run around before the next round of windy rain blows in.
Yesterday I was part of the mad "dash" to beat the storm.  As I walked through the area with our little dog Shadow, I noticed three brothers on the sidewalk ahead of me. Two of them looked to be under 10 and their older brother, a teenager, was running on the sidewalk as the younger ones looked on.
When the teen got to the end of the sidewalk having run full speed the length, he turned to the little boys and said,  "GO!"
After one of the little boys--who was now clearly racing his brother-- tripped on a stick that had blown from the overhanging tree, the older brother quickly ran to his little brother's side to check on him.
After they determined the only damage was a skinned knee and bruised pride, the older brother had the brothers wait back at the race starting line. As they waited, the teen carefully inspected the path where the younger ones were going to be traveling. He removed the sticks and pebbles and crumbled parts of the sidewalk making sure the path was clear for those soon to follow.

But if anyone has the world's goods and sees his brother in need, yet closes his heart against him, how does God's love abide in him?

Let each of you look not only to his own interests, but also to the interests of others.

Whoever has a bountiful[a] eye will be blessed,    for he shares his bread with the poor.

Who are you leading? Who is watching you? Are you a stumbling block? Do you leave debris behind?


Or like this brother, do you clear the path so others are safe to run their race?

Sometimes, it is simply a matter of noticing other's needs.

I hope we will actively "notice" the sticks and stones in the pathway of our brothers and sisters.

Are you part of the clean up crew as we live life on the sidewalk? After all, someone is watching how you run your race in order to prepare for their own.