The Eyes of Hate 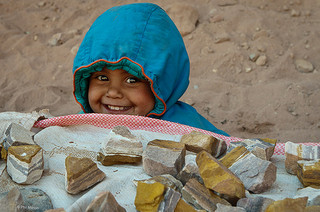 Those eyes used to be so full of life, sweet, beautiful, full of hope.

I've seen those eyes before. But now, on the news...all day long... they were dark, cold, void of any feeling save that of hate and anger with a touch of ego. The face was grown up but the little boy dark eyes were still the same. I'm trying to recall the details...

Yes, now I remember. I had just gotten off of a lame horse in the 110 degree heat of the sunny June desert. I was with someone who had injured her foot and could not go on to the back side of the remarkable beauty and artistry that is Petra, Jordan with the rest of our group of 17 missionaries and tourists.

We opted out of the last leg of the tour and stayed back in the only shade we could find and bought a 4 dollar hot Coca-Cola in a can.  We decided we better head back toward the entrance of the hidden passage.

You've seen this amazing site before if you ever watched the Indiana Jones Movie. Remember, the one where they are seeking the Holy Grail?  This is Petra. 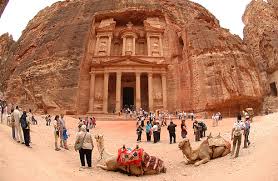 As my sister-in-law and I walked slowly being cautious of her now severely injured foot, several young men and boys stopped us on our path. They seemed to come out of the caves hidden inside the mountain.

At first we were greeted with a cheerful, "Welcome to my country" followed quickly by a change in tone and an evil stare demanding, "GIVE ME A DOLLAR, AMERICAN DOLLAR!"  It was amusing, momentarily. Then...it wasn't!

Suddenly the youngest of the boys put a rock that had been painted (with the colors from the natural sands in that area)   on the part of my arm that bends at the elbow. Picture my arms folded and the crevice that would form in the bend of my arm, sort of making a place to tuck in the painted pebble. He put it there and said, "You buy NOW...you MUST BUY...You took!"  I dropped my arm causing the pebble to fall to the ground. This was repeated 3 times. The yelling boy tucking the rock into my sleeve or pocket or arm and me dropping it to the ground. We had already purchased several items as we entered the area.
The tone of the happy "WELCOME to my country" now turned to sounds of one teen threatening to call the police.  I let him know that the armed uniformed officer from the government of Jordan who was walking behind us at a distance was our personal body guard and I would be happy to let him explain to the guard what had just happened.

The boy called me "SHAYTAN" and spat near my shoe. He threatened that this woman next to me would be harmed (speaking of my sister-in-law) because she could not run away. He motioned to the men up in the hills.

The look in this young pair of eyes...it was the look I saw today in the news. A look that came from years of grooming. Years of hate filled words. The "dark, cold, void of any feeling -save that of hate and anger- with a touch of ego" eyes. He looked justified, he felt proud of his hate.

Betty and I continued walking toward the entrance as we noticed the older men watching up in the hills. They were the ones who send the younger boys down to isolate and extort money from those who seem to be easy targets and as the guard told us later, usually without men by their sides.

At first I was angry. Then as anger turned to fear...I had to make a choice to remember why we had come here in the first place. We were between stops...Israel to Egypt. Our goal was to get to a Sudanese refugee school in the "Trash City" area of Cairo. Having just left Jerusalem early that morning, we had seen the place where OUR LORD AND SAVIOR JESUS CHRIST walked on water. We stood where the great High Priest Whose Name is Love, Lived and Died for Me...Of course there was evil, and hate. And it had been passed down quite perfectly to this generation...all over the world, right in our own country as witnessed by this horrific week of hate wearing back-packs.

My sin...nailed Jesus to the cross and if not for someone telling me about my sin, and the Love Jesus had for me...You would today be looking into my dark, cold, void of any feeling- save that of hate and anger- with a touch of ego-eyes too!

As I watched this manhunt unfold on television over the last two days, the picture of the boy/man about the same age as my sons, had that look. The look I'd seen before face to face as I was called "Shaytan"- Satan-The one who came to steal, kill, and destroy-6 years ago in the Middle East.

By the time I got to the trail back out of Petra and got a different horse to get us out of the caves, my heart could not help but wonder what that beautiful little boy could have become had someone told him the truth of the Love of my savior.

I go into this night with great heaviness of heart.  I hear cheers coming from the television. I am relieved that the people of Boston can sleep tonight. Yet I have such mixed feelings of what brings this kind of terror and tragedy into the lives of men and children and women.

Only one is the enemy and author of the lie these boys/men believed...I know because I've seen him in the eyes of another...I have seen SHAYTAN at work!

I know that "Greater is He that is in me than he who is in the world" and I will trust Him. I only wish for that little boy whose picture was the face of terror to our country this week, to the new group of little boys still peddling rocks at Petra, to the little boys and girls learning to hate me because of the God I worship, that those who would follow behind in their footsteps, could yet be reached with the truth of the ONE TRUE LIVING GOD!

We must, MUST, go in the all the world a be the image of the living God.

Billy Sunday put it best, "If you want to drive the devil out of the world, hit him with a cradle instead of a crutch."

Praying with a heavy heart tonight as, once again, I have looked into...the eyes of hate.