Welcome To The Family: The Story of Shadow 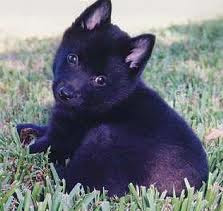 I have a friend who  is a Professional Organizer. Having a friend that made a living noticing clutter did not bother me when I lived the fairytale existence of 3.2 kids, a house with a 3 car garage allowing for plenty of storage and a big enough walk-in closet in the master bedroom to store a small elephant along with any unexplained piles-O-clutter if she dropped by. But since our wonderful journey post 9/11 to a smaller much more charming (okay old) house-- I can't find enough energy, time, space or desire to get a thought organized much less the whole house. So we...adjust, to put it mildly.

I used to be the one between the two of us that was the scrub it 'til it shines and scrub again freak and she was the one who thought the top of the microwave was just an extra flat "workspace" for storing junk mail, Wal-Mart receipts  and "to be  filed later" items.

Somewhere along the way we switched roles. She has become the guru to National level home relocations and she has also become quite the expert on all things organized.

So, I am fondly thinking of her tonight and wishing she was closer to help me return to my former wonderful-organized self.

Why tonight?
Well, as I step over the doggy vomit to get to the last roll of paper towels stuck behind the kitchen bar stool right next to an old copy of The Chronicles of Narnia  -- which has not been read in over 2 months --  covering up a pack of double A batteries I've been searching for all morning -- ironically used to power the Swiffer WET JET mop (and the nose trimmer) - I'm thinking I could use her advice.

But first...is the anti-bacterial 409 in the kitchen or the bathroom?

The timing of this is too weird. I just saw a commercial for Hoarders or some such show and really don't ever want to fall into that category.  Not yet a Hoarders episode candidate, but some organizing pep talks wouldn't hurt.

I know how to organize and I like to clean house as therapy...most of the time...I think because I really did not know how to the first 3 years of marriage.

I traveled too much for work and just cleaned frantically on weekends. Once I got to stay home as a mom, I at least kept clean dishes, bathrooms, surfaces and floors.
I am still the one that likes to scrub. I'm not a hoarder...but I just can't seem to find enough closet or pantry space. I just need a cheerleader right now. Oh, and I am not a hoarder. Did I say that yet?

ANYWAY, this carpet cleaning  reminds me ---
That little dog came to live in our home in 2001.
Right after two planes flew through the Trade Centers --  some of the fallout landed in our living room in Oklahoma (metaphorically) forcing my husband's company to layoff aircraft workers. Rich brought home a pink slip and  little Shadow -I thought as a distraction for the kids.

Rich is a very positive and optimistic person and a puppy seemed like a bit of hope. You know, if dad isn't worried about feeding another critter we shouldn't be either.

Shadow is quite the fortunate little dog. You see this is not the first "reversal of dinner" experience from this pup in our house. In fact I was a bit worried that we need to venture to the vet to find out if this is just a Schipperke (Belgian Boat Dog) tummy trait or if indeed little Shadow has a more serious medical problem.

So, Why is Shadow fortunate? Because again I am a bona fide, lysol packin', bleach lovin', scrub 'til you see your reflection kinda gal. Not the "put up with puking puppy" kinda' gal. Just the fact he is still here makes him fortunate.

A little clutter, I can handle, but germs...

So, as I am letting the 409 soak in I am reminding myself, he is part of the family.

Although I was not forced to take an oath that included the words "in sickness and in health" when my husband brought the puppy home, I do believe pet ownership is to be considered a serious commitment. Or at least I was informed of this fact about six years ago by "child to remain nameless number four"-- that Shadow is part of the family.

Sounds like a speech the parent should give the child, right?

Well, you see, our two oldest children (unnamed child one and two) were adjusting to a new town and a new high school. I had been homeschooling our two youngest children after moving to aforementioned new town. We decided that child number three who was now a pre-teen might enjoy getting to know some of the kids at the local Christian school. So I would deliver child number three to School, take home schooled child number four out to breakfast or the park, then return home to start school.

One day we returned home to find that Shadow the wonder dog had blocked the entry to our house with a little...well...present on the step.  Seems someone forgot to tell Shadow we moved off of the 3 acre spread which was his outdoor potty. We now lived in a house on a city lot with a patch of grass about the size of a pitcher's mound.
Confusion on where to "DO" his business at this new location set in and the back porch seemed just as good a place as any, apparently! ARRRRRG@*!$#^&/#! $!@!!!!!(Pirate Face).

Along with Shadow's new hobby of crawling under the gate and running around the neighbor hood with all the other delinquent pups, the poop on the porch thing made me snap...I had had it! Or at least I had HAD IT ON MY SHOE...for the last time.

This dog was exhausting me. Too much work for one pup.
I woke up the next day with resolve - the carpet cleaner and the attitude- and no mixed emotions.
This wandering little- disoriented pooper-puppy had to go!

I started the normal daily routine:

Showers all around: check

Armpits deodorized: well who knows, but after the lunch was packed and backpacks ready I loaded the kids as usual into the aging Suburban with the addition on this day of Shadow on his leash.

Wave goodbye to children 1 and 2: Check


I took child number three to school. Before the youngest and I went to get a bite to eat, I swung the Burb around and headed to the humane society.

Mr. unnamed child number four had just been his usual cheerful self with the addition of a giggle or two as he talked to Shadow as we drove.
As we pulled into the humane shelter, my son noticed other puppies outside and asked if we were going to play with them. I said no, we were taking Shadow to play with them. This seemed fine with the little guy until...he asked,"When will we be back to get Shadow? Today or Tomorrow?".
Well, never having been one to lie to my children - okay so there's that whole Santa Claus thingy and for a time they may have thought babies came from Toys R Us- I told him Shadow needed a home that had more room for him to run like our other house had and that he would not be coming home with us again.

Suddenly and without warning...my son's face turned from sweet little guy to the distant cousin of that Gadarene demoniac dude Mark wrote about in the Bible!
Out of his mouth came a blood curdling, "Nooooooooooooooooo-----(breath)-ooooooooooooooooo!!!" My son's feet hit the door with the power of a bulldozer and he blocked me from getting to Shadow.

This child then proceeded- through buckets of tears and in the loudest, yet sweetest little cry to say, "Mommy...SHADOW IS FAMILY! I MAKE MESSES and DON'T LISTEN SOMETIMES...WHEN I AM OLDER IF I DO SOMETHING BAD ARE YOU GONNA GIVE ME AWAY TOO?" OUCH!!

Well, after removing the word shaped dagger from my heart, I got back into the drivers seat and cried all the way home.

For the rest of the day Shadow and his rescue hero were not far out of each other's sight. Once and awhile I would hear the voice of a 6 year old speaking to a puppy and breathing that cry recovery breath that we all do after a big round of waterworks. You know the one. It seems to help restore and cleanse away the hurt with each heavy sigh.

So, as I must now finish cleaning up the lovely left overs on my carpet runner, I will try to remember, that Shadow is part of the family and I need to learn to forgive and protect him as such. I have learned from my son that some of our family members have four arm pits and four knee caps and are just as important as those with two legs.


Hmmmmm...I am suddenly grateful not to be hammered by my heavenly Father every time, as my son said, "I make messes and don't listen sometimes!". I am glad my Father loves me, and has forgiven me and allows me to continue to walk with Him and be part of the family of God.

I fell two years ago and completely tore everything possible in my ankle.

I could not make it down the back stairs everyday to feed and water and take care of Shadow. So, on October 15, 2008...Shadow the wonder dog became an indoor dog. He was instantly housebroken, I believe as a gift from God, and besides the little stomach upset from time to time is a great pet family member.

He was such a sweet part of our lives.